Foil boards for the kite bored.

It is certainly shaping up that 2019 is the ‘year of the foil’.  It has finally hit critical mass where the regular kiteboarding community is embracing the newest addition to our sport, foilboarding.  Foilboarding comes in many flavours and as such, has a very diverse choice of gear to suit the many disciplines we can enjoy.  At Action Sports WA, we carry foils and boards for beginners, freeriders, wave kite foilers, paddlers, racers, freestylers and prone surfers.  This is a guide to some of the boards we offer and how to select the board that is right for you. Although most boards can be used to learn to foil, there are some which are a lot easier than others.  Strictly speaking, beginner foiling gear is more determined by mast height and wing sets.  The boards we find in the beginner category are; The North/Duotone Freefoil, Slingshot Alien Air, Slingshot Simulator and despite it’s name, the North Pro Foil board are very easy foil boards to get started on.  We recommend starting with a single centred front footstrap.  The centred front strap helps you to keep the board on your feet (or your feet on the board) during water starts and is an ideal reference point for front foot placement.  The fore and aft trimming or (Pitch control) of the board is the most critical part of learning.  Keeping your back foot free to place whereever you like is advantageous because you can step forward to keep the foil down in the water which is a must when you start as well as allowing you to bail out more easily if you lose control and crash.  The wider width makes it easier to get the board up and planing prior to lift off onto the foil.  The quicker you come out of the water, the quicker you can start getting a feel for the trim.  Generous nose scoop is also important as you will be touching down nose first fairly regularly in the beginning.  A good scoop or flexible nose will “bounce” the nose back up without spearing you into the water.  Basically, something stable and easy to water start is best.  A bonus is the full EVA covered deck and rails of the Slingshot Simulator for when you make inadvertant connection with body to board, not to mention the price!

The Freeride range covers almost every board, as once you are up and riding on the foil, unless you need to specialize in a given discipline, all boards work.  We recomend boards between 4’6″ and 6′ with a bit of volume and width in the tail.  As I said, practically everything works and so long as you are up on the foil itself, all the board does is connect you to the mast.  When you come back down and the board touches down, it plays a part, but otherwise, it’s in the air most of the time.  Shape can be as wide as 60cm, or as narrow as 30cm, it can be as long as 6′ but as short as just 100cm. The biggest determining factor is YOU.  The shorter the board becomes, the more responsive it is and the better control you can have over the board.  For free foiling, one, or no straps is generally best.  It allows for an uncluttered deck where you can stand anywhere you need to.  The absence of straps makes toeside riding much easier and tacking and gybing way simpler if you aren’t trying to get your feet into straps.

Freefoiling is generally (but not always) up to or below 20 knots board speed.  The faster you wish to foil, the more straps you need.  Fast free foiling with two inline straps (front and back) works fine but gybing or tacking are made difficult due to the single front strap, and your need to get one foot out of and the other into the same strap basically at the same time. Foiling above 25 knots really requires three straps to keep you connected to the foil at speed.  The twin front straps fascilitate the tacking where both feet are actually in both the front straps for a brief second during the transition.  The Shinn Jacksons (125 and 145) are a free foil board which will take some serious abuse being pressed and ABS railed.

Freestyle foil boards are generally much smaller so they keep the swing weight of the board to an absolute minimum.  The shorter length, narrower widthlighter weight, and beveled rails make for an excellent board to throw around in the air.  We recommend the Slingshot Dwarfcraft series boards in 3’6″ and 4’6″ and also the Duotone Pace 4’3″ and 4’6″.  All four of these boards are lightweight, very versatile and fun.  Huge lofty jumps on a foil board is more difficult due to the weight of the foil under the board, but also the weight of the board too.  Smaller is better so long as you can handle the very short nose of the 3’6″ Dwarfcraft.  Not ideal for tall people, but super handy for traveling!  These boards are best with tracks on the bottom to accept a wide variety of different mast bases and allow the board to be trimmed to the riders preference.

Most pro level racers ride custom made or high end carbon boards often with tuttle boxes for the mast foot.  We don’t stock that level of board but can order them as the customization most people want is difficult to offer from one manufacturer with a production model.  Having said that, the Moses Comet board and Slingshot Hypermiler are good examples of production race boards and to a lesser extent the North Foil Pro.  The Duotone Pace is also an excellent fast foiling board and will satisfy all but the Formula or Pro class racers at a fraction of the cost of a custom carbon race board.  These boards are all characterized by short noses, tapered tails with heavy bevelled chines to prevent the board catching on the waters surface when cranking upwind at speed.  There is still some innovation in race board design so many of the bigger manufacturers aren’t interested in getting involved until design settles down.  ALL race boards have three foot straps and mast tracks in the bottom.  The strap position is generally quite wide to give the best possible control at scary speeds.  Speed without control hurts.  They also tend to be quite thick in the tail tapering to thin on the nose.  The bevelled rails/chines help the board bounce back up in case of contact with the water at speed. 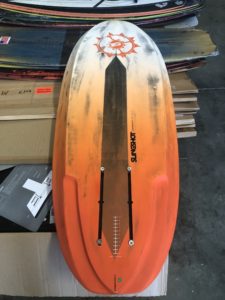 For the guys and girls looking to paddle in to small waves and foil surf, there are a couple of options.  The Slingshot Simulator and Slingshot Skywalker are excellent in having huge bouyancy and flat rockers to give you paddle speed to get onto the small bumps.  These boards are ideal for the beginner surf foiler.  The Fanatic Sky is leading the charge in the best all rounder for surfing for intermediate to advanced riders.  Lots of volume, plenty of width, and a flat bottom make this board perfect for intermediate to advanced foil surfing.  It is also the lightest and shortest of the prone boards and it’s short length give you good control of the board in turns and whilst pumping.  With the adoption of larger wings, the surfing foils are getting more lift at lower speeds and are generally more stable allowing the short Sky board to do what the bigger boards can do without having to sacrifice pumping weight.  As i come back to this unpublished BLOG, Slingshot have released a new board called the High Roller.  The High Roller is designed for intermediate to advanced surf foilers and is available in three sizes 4′, 4’6″ and 5’2″.  These should be in store by the time this blog is published and you are reading it.

As more and more wave kitesurfers become interested in foil boarding, there is a growing need for surfboards which will double as a foil board.  These boards are excellent if you want to travel and not have to bring two large boards on board a plane.  The Duotone Hybrid, is a 5’3″ or 5’1″ snub nosed surfboard with four screw inserts in the bottom to accept a standard foil mounting plate.  This keeps the weight down and adds simplicity as well as keeping the cost down.  The Slingshot Converter 5’4″ is another option and instead of inserts, it utilizes the full twin tracks to allow for mast positioning.  The twin tracks add a little weight over the inserts but add the ability to attach a variety of different foils and trim to suit the riders needs.  These surfboards are heavier than a normal kite surf board and may have a modified flat section in the tail rocker to allow the mounting plate to sit flat against the bottom.  This will obviously effect the way the surfboard rides on the wave and on the opposite side of the coin, the surfboard will be much bigger and heavier than a dedicated foil board.  However, a compromise in both areas can be a god send if you want to catch a wave in the morning and foil in the afternoon on the same board. 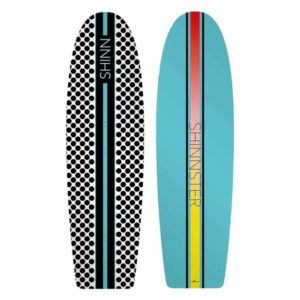 There are a few boards which don’t really fall into any of the above categories.  The Shinn Shinnster is a surfboard shaped skimboard which rides somewhere between a surfboard and a twin tip but behaves like a skim board.  It also happens to have the ability to add a foil mount making it super versatile for people who like experimenting and riding a little different.  Shalllow water, small surf, lightwind, foiling and skim all work on this board.  The Shinn El Stubbo also falls into a variety category.  Similarly, snowboard pressed construction, flat, quad fin and foil mountable it works as a surfboard, light wind groveller and foilboard.

Despite having a massive range of boards to chose from and even demo, the choice isn’t quite as overwhelming as it may first seem.  We definitely recommend starting on a beginner kit with a generously proportioned board to begin with if you don’t really know if you’ll like foiling (you will ;-)) or if you aren’t decided on the discipline you’ll prefer.  The beginner gear will make your progress much faster until you gain enough experience to really want to try something different.  For me it was race foiling but I started on a Slingshot Alien Air on the beginner wing, then changed to fast freeride foil and free race board before I bought my race equipment.  For our other staff, they like freeriding and playing around in waves, we all learned on different equipment which proves it all works.  Beginner sets are in very high demand currently and will resell for a reasonable amount so it won’t be too cost prohibitive.  We will also gladly trade in second hand foil kits to help you trade up to the next thing, if you so choose.  Many of the sets are modular and don’t require entire rig replacement, usually just the front wing.

Best way of all, is to come in and talk to any of our staff.  Every staff member rides foils at various levels to offer you first hand experience and advice so you get it right first time.