If you haven’t read the first part of the evolving story of wind wing foiling, go back and have a quick read now. If you’re up to speed, then let’s talk about Wing foiling with a purpose.

Downwinding, the best part of Stand Up Paddling boarding (SUP).  This involved paddling a 12-18 foot long board straight downwind utilizing the wind blown waves to surf the boards. This was very challenging, requiring great physical condition, strength, stamina, footwork, balance and and a sense of “can do”.  It was great fun but very cumbersome, especially when lifting a 17 kilo, 17′ long board out of the water in 25 knots of wind after paddling two hours and having jelly legs and spaghetti arms.  Good news is, SUP is waning in it’s original form, but is being replaced by a suitable successor. The Foil and wind wing downwinding.  Same idea, less difficult and more fun! 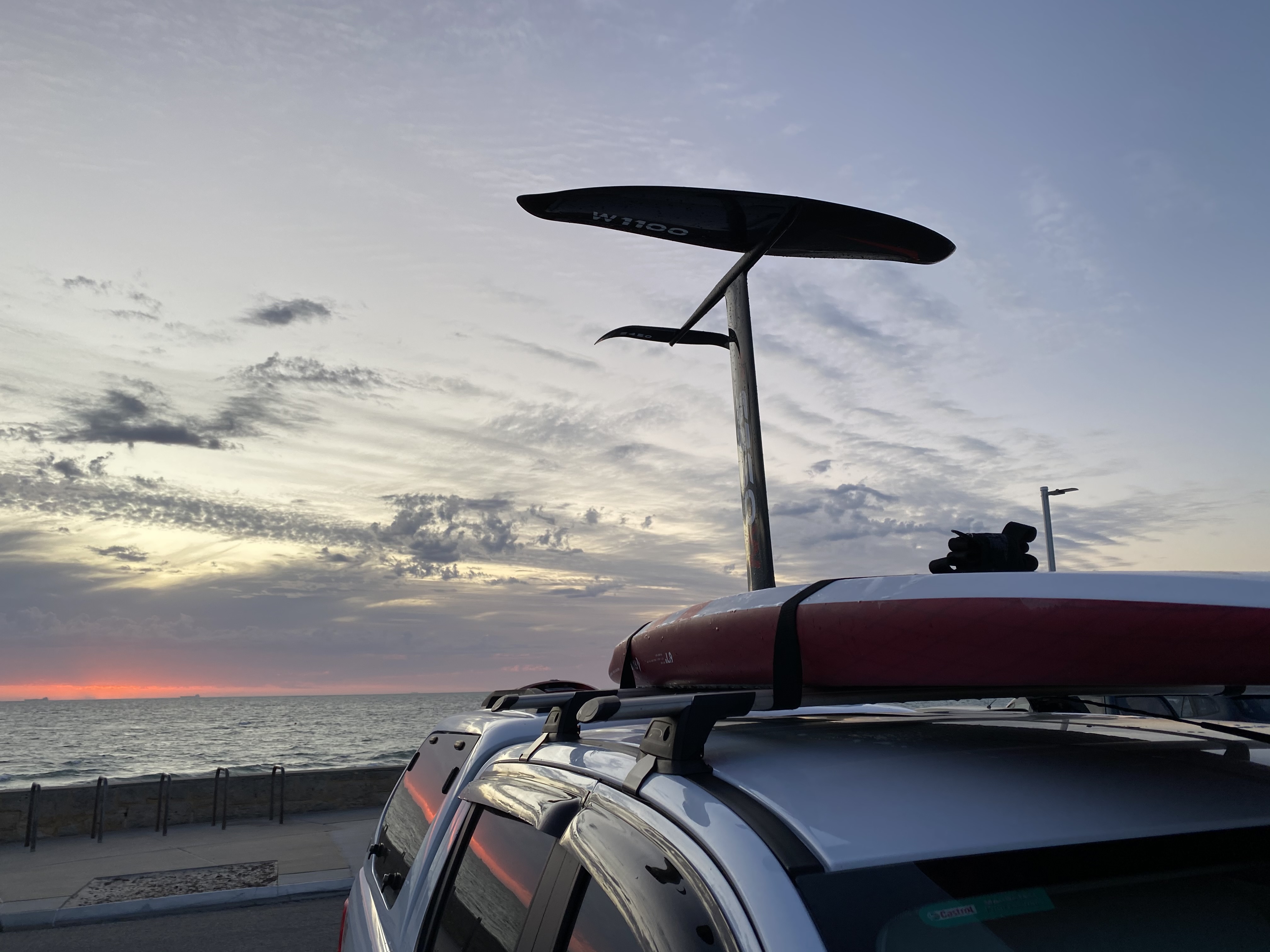 Foil downwinding can be done in three forms; Prone foiling (paddling onto your feet like a surfer) on small boards and pumping the wing to provide the propulsion to get you onto the wind chop. Secondly, SUP Foiling: using a paddle on a very short SUP board with a big foil under it (Way more difficult than it sounds), or using a wind wing to power a foil (aka wing ding, wing thing etc). The latter is the easiest by far as you have a power source on hand when you need it, which can be used in any percentage of power from no power (drifting with no power) or totally “on” with up to 100% of the power needed to propel the foil and stay aloft.  When downwinding, the terrain is rarely perfect and sometimes the waves are working well and allow you to glide along effortlessly as you foil down and across the faces of open ocean wind chop. Othertimes, you find yourself with no waves at all and you use full power of the wing or a percentage thereof whilst you supplement with pumping the board and foil, or just use the wing entirely for a free ride whilst looking for your next bump to surf freely on wave power alone.

We recently received the newest Moses (SUP/Surf) wing, the 1100 high aspect wing which is a beast in terms of size, but so efficient on the waves. This coupled with the Duotone 4m Wind wing and the Fanatic Sky SUP foil board, made for a new combination of downwinding goodness.

SO WHAT IS DOWNWIND FOILING?

It’s pretty much what it says on the box, using a wind wing to power a foil going with the wind and riding waves created by the wind.

Like all good downwind runs, you start at an point upwind, and then, as the name suggests, ride along the coast following the wind to your destination, somewhere downwind. In between, you ride any bump you can find and if you’re a keen study, combine a wind chop, with a ground swell and get long and exciting, fast and free rides (also known as “glides”). The challenge comes from reading the ocean surface, watching for gusts, lining up troughs and crests of waves, and reading the waves and how they form and change to try and “link” runs from one wave face into a trough and then linking to another wave face as far as you can. 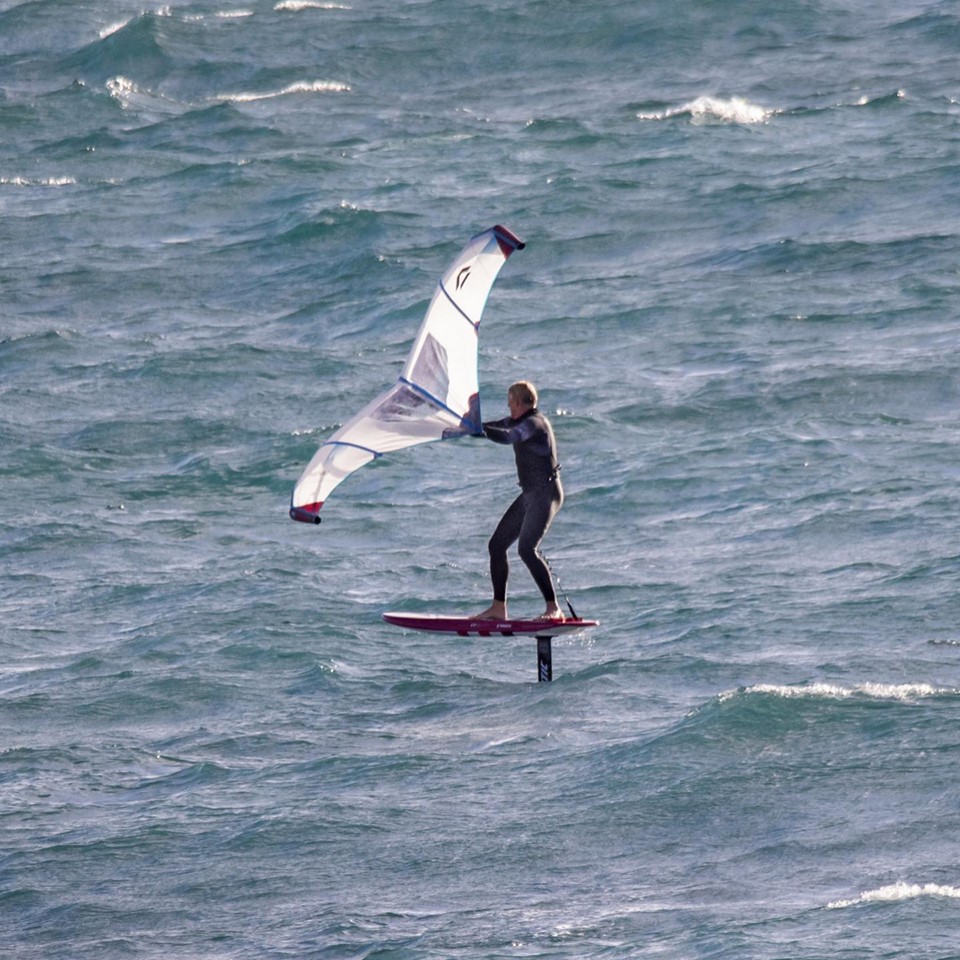 The entire experience is like riding a skateboard in a skate park only the terrain of the skate park is constantly shifting, undulating and varying by the second. Wind chop can be as small as a 2 foot bump or can be as exciting as dropping down into a 6 foot pit which brings with it the challenge of managing speed and direction and also managing the depth of the wing below the board so as the board doesn’t touch down on the surface and the foil wing doesn’t break the surface.
It’s kind of like the endless surfing experience and surfing in a very true and simple form. The wing in your hands is a source of power, enough to drive back upwind or cross wind if needed. Once you start riding downwind, the wing creates almost no propulsion and it simply hangs as you surf along on the foil. The idea is to use the wing as little as possible just to fill in the gaps between pure glides. It allows you to be foiling the entire time rather than just when on a “bump”. This was always the problem with SUP downwinding on a long board, there was a lot of paddling and balancing in between rides. The more experience you have in foil downwinding and reading the ocean waves, the less you need the windwing.

The windwing allows constant foiling and can give you the propulsion to race over to a section of a wave that would never be possible without the wing. There are many times when the wing is swung from one tack to a new tack as the foil is banked on a wave coming from a new direction. The speed is kept through the turn and then the wave takes over and you accelerate on the wave for 20-30 metres only to see the trough in between waves deepening but in the direction you were on previously, more speed and a quick but subtle shift in trim to keep the foil submerged and then, a quick bank in the other direction and away you go again, still with the wing parked and not providing power. This can happen multiple times as you “link” wave after wave. If you fall, simply climb back on the board, raise the wing and get to your feet, pump the foil and carry on again.
The beauty of downwinding is the swell that comes into the shore will break on either reef or sand banks. This can be offshore on a reef, or along the beach and offers additional fun where you can stay and ride the waves before “kicking out” before the shallow water puts and end to your fun.

The equipment choice can be critical to maximize efficiency and the amount of time not using the wind wing. Hi aspect ratio wings are better for lift with less drag, and drag is the enemy of long glides as drag slows you down.  A low drag foil can make the most of subtle bumps with little power where a foil with more drag will slow to the point the wave passes you. Of course any foil can work, especially when you have the wind wing to create the power when the waves aren’t working. In other words, don’t let not having the perfect gear stop you from trying downwinding, it’s great fun at all levels.  One of the best things about wind wing foiling is, everything breaks down into small compact parcels making it easy to travel, or, as I do for local use, just put the assembled board and foil on the roof to save time. 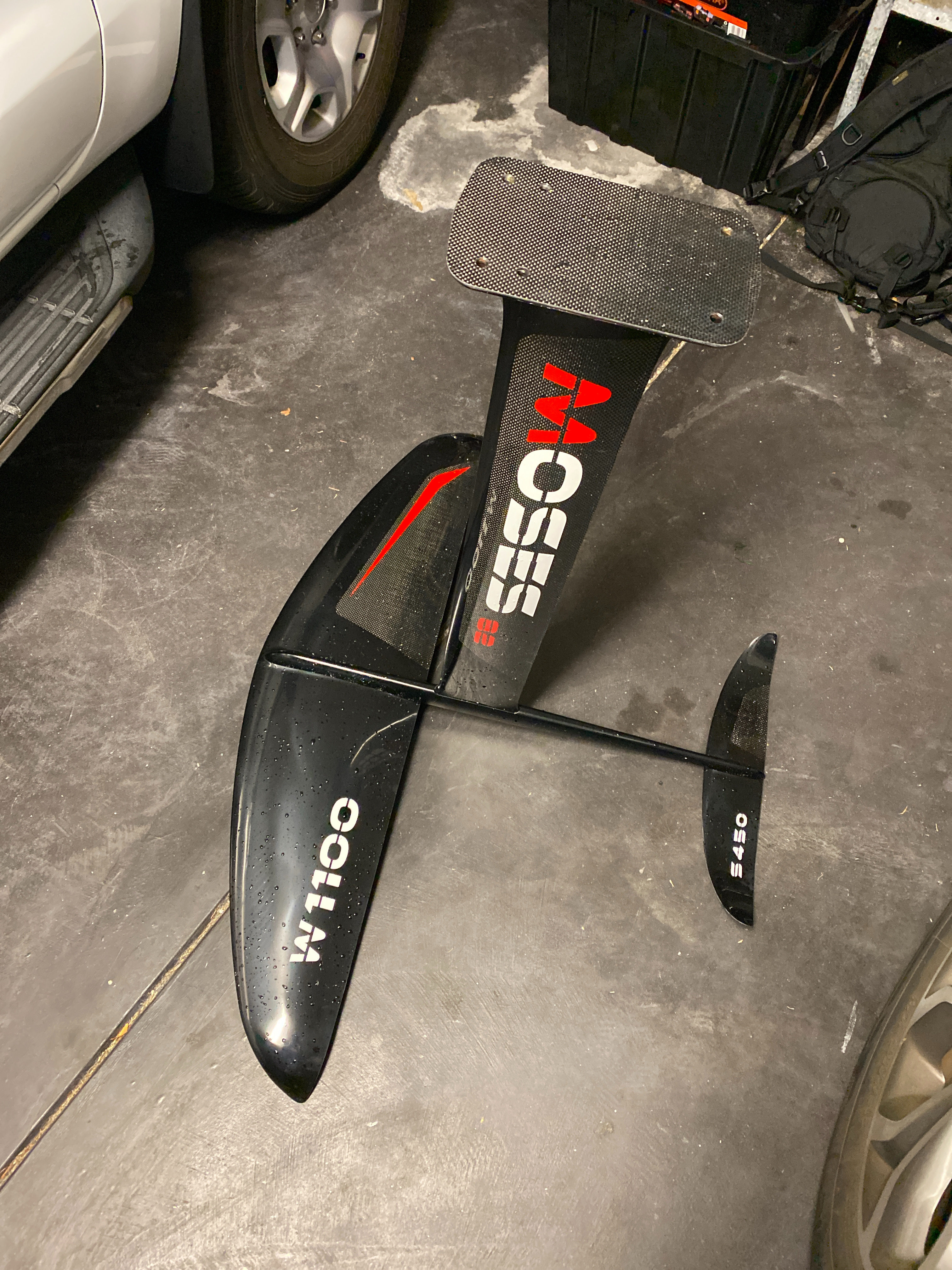 The Moses 1100 high aspect wing is easy to use and very efficient with incredible low speed stability and very good high speed ability. It has smooth and easy glide with no need to add additional front foot pressure as speed increases. Many other foils have high stall speeds and create more lift as speed increases which makes it challenging to remain trimmed due to constantly changing conditions resulting in constantly changing speeds. Too much speed, too much lift, breach and crash. Too high stall speed, and as speed washes off, or too high an angle of attack of the wing and they stall and allow the board to touchdown in a crash. Every crash means you need to restart. The restart is the most energy sapping part of foiling downwind as you start from climbing onto the board, wrestling the wing, one knee, then to your feet, then pumping the foil and wing simultaneously to begin flight again. If this happens repeatedly, you can fatigue rapidly leading to more crashes and the problem is exacerbated.

The 82cm mast is an excellent length to give you enough room for error and keeping the board above the wave crests whilst safely keeping the wings below the surface.  This also helps when pumping the foil with your legs. 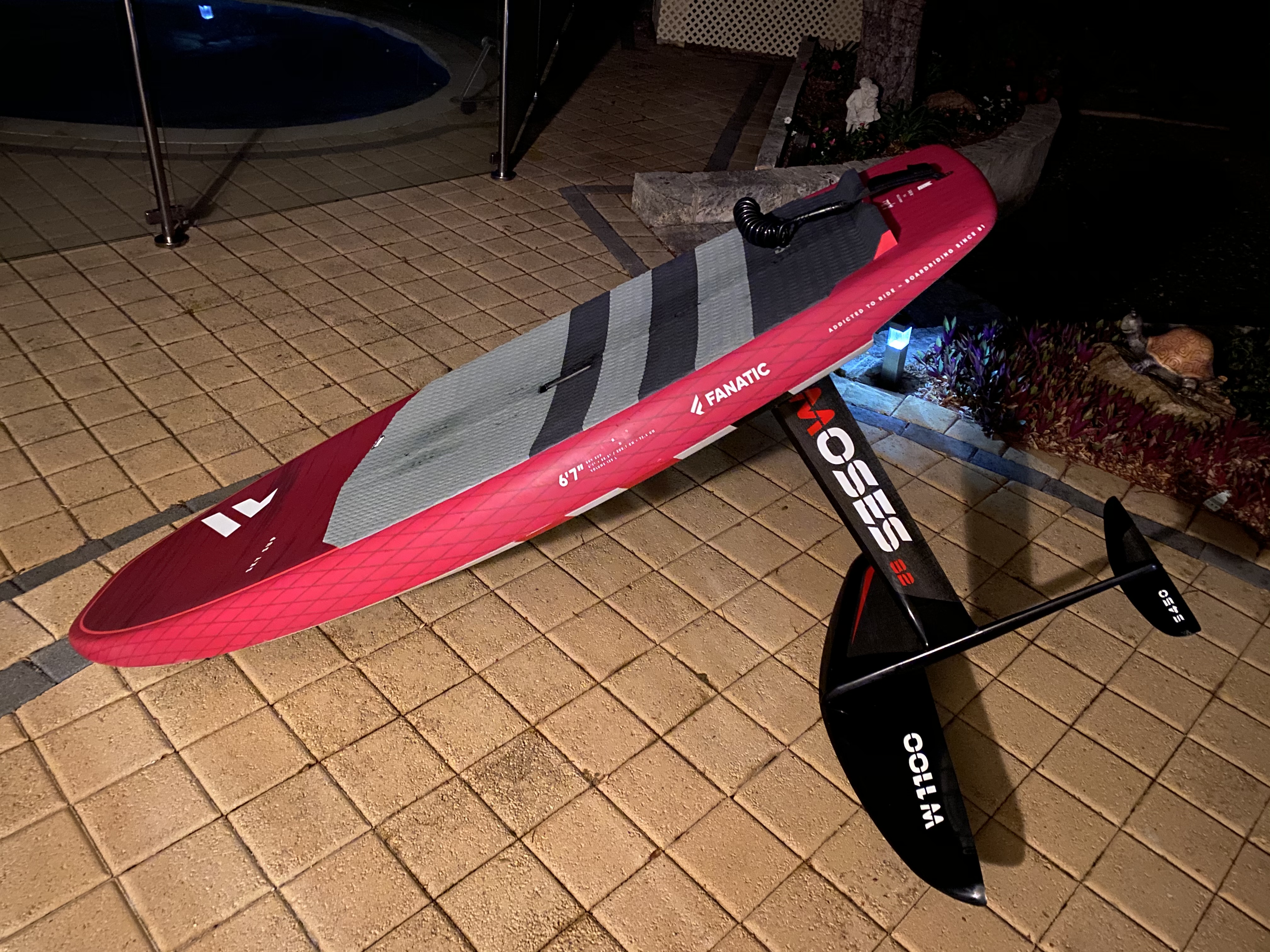 I’m a firm believer in having the right gear for the job when learning. It leads to more fun, less frustration, and faster progression. The Fanatic Sky SUP FOIL board is stable, has plenty of volume, a well cut away tail to help release from the water when you begin pumping on start, and a shallow entry angle on the nose which facilitates easy acceleration onto the plane. Of course having as smaller board as possible is easier to manoeuvre when flying on the foil, but is a disadvantage when you are learning the art of balance and water start.

Being 94 kg and 6’3″ tall, I ride the 6’7″ board with 126 litres of volume making it childs play to balance and water start.  Although I can also ride the 6’3″ with 106 litres of volume, the level of challenge goes up a fair bit and on long runs, fatigue is a concern so I make it as easy as I can for myself.  Remember: 1kg of body weight, displaces 1 litre of volume.  a 94 litre board would be entirely under water for my body weight. 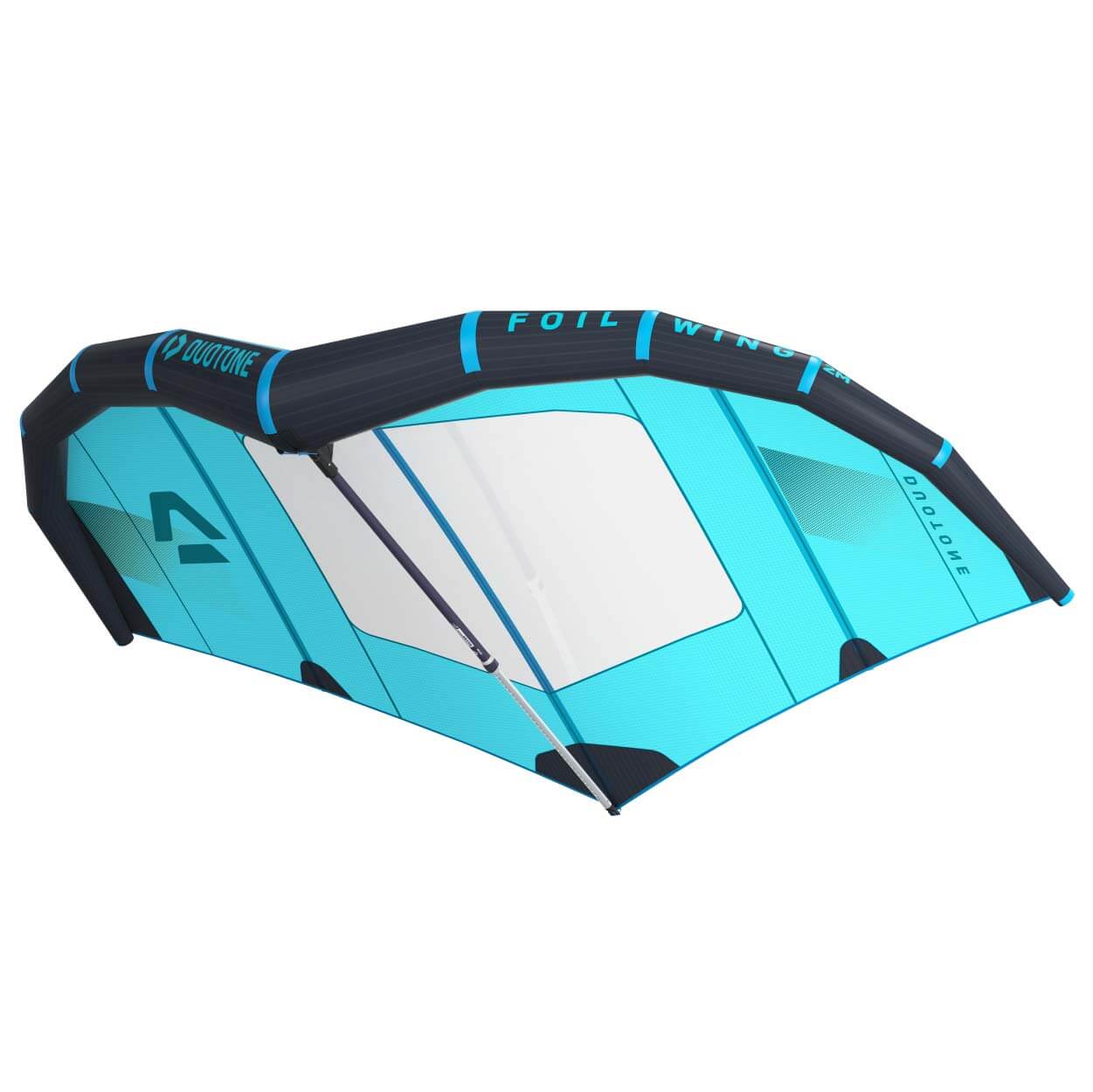 The wind wing is a little less important than the foil itself as it is a means to an end.  It’s role is to provide power when not on a wave.  ALL wind wings work well enough to do the job, however, some wings drift better than others or with more stability than others. In our range, the Ozone WASP drifts with greater stability and less effort when you are not using it for power. The Duotone wind wing is much easier to handle and control with the boom and is kinder to your hands, it also has the option to be able to power it up or to flatten it out to reduce power giving it a wider wind range. Either wing works well and is simply a matter of personal preference. For me, the Duotone is so easy to handle in gybes and handling on the water, and the window to be able to see through is gold.

The only other items you will need to begin wing foiling is a coil leash for the board and a coiled leash for the wind wing. You may also like a helmet and impact/floatation vest for safety sake, especially if you are going a long way off shore. In this case, a drink bladder is also a good idea, as well as a couple of hand helf smoke flares and maybe a Personal Locating Beacon (PLB).

If this article has peaked your interest, by all means, send us a message, leave a comment below, or drop in to see us. We have absolutely everything you need to begin or to upgrade your current gear. Advice is always obligation free and doled out generously.
Yet another new world of fun awaits the intrepid funster!