Enter the Wing Foiler (A brief intro to a new sport)

Enter the Wing Foiler (A brief intro to a new sport)

As I schlep through yet another thread of drivel written by the uninformed, inexperienced and seemingly severely threatened individuals making all sorts of negative remarks about wing foiling, I feel compelled to write my experience with these wing things.  This is more of a personal impression rather than a gear review, so take it for what it is.

I am always hugely sceptical when new things come along, the game changers, the latest and greatest fabrics, tech and hype, but, I also keep an open mind and a closed mouth until I have first hand experience.  TBH, I thought it (Wing Surfing) looked a bit lame in waves but I had visions of an easy and exciting way to downwind foil in the summer months with unfettered access to any wave or swell I chose to engage with.

So, in June, we had the Duotone/ION/Fanatic dealer meeting on Moreton Island, Tangalooma Resort.  There was already a lot of hype about the Wind Wings well before we boarded the plane.  I was armed with my shield of scepticism, but laid down other weapons to give the Wind Wing a fair go. 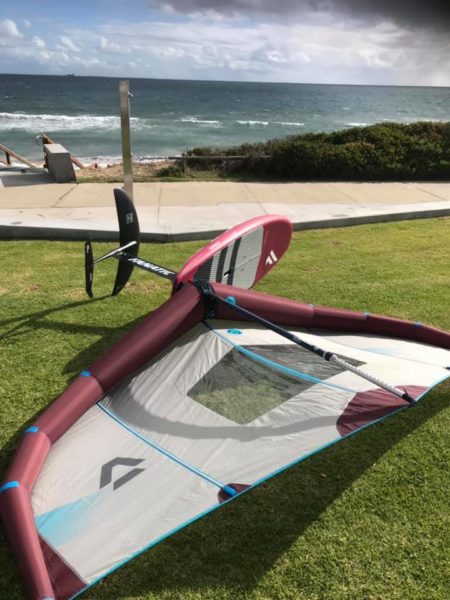 As a shop we all but exited the SUP industry as the SUP bandwagon started losing momentum some time ago.  We were determined not to get back into SUP, however I still have an unlimited downwind race board which I train on, an 8’7″ wave SUP and a few nice paddles.  I have now added a 6’3″ foil SUP to that collection.

At the meeting we had three different Duotone Wind Wings to play with (5m , 4m and 3m) and three Fanatic SUP Foil boards (6’3″, 6’7″ and 6’11”).  Unfortunately, the strongest gust we had all week was about 12 knots and there were a few guys who managed to get the Wind Wings up and foiling with the 5m wings and 2000 and 2500 Fanatic foil wings.  It kinda looked OK, even in the light winds.  I personally thought the windsurf foiling and kite foiling looked better and more fun, but, open mind, closed mouth, I bided my time.  When I finally got a go, the wind had dropped to under 8 knots and there was barely enough to propel the board let alone get it foiling.  Dissapointed, but unperturbed, I was willing to pull out the wallet and buy the Fanatic Sky 6’3″ SUP with 2000sq cm Fanatic Foil and we already had a 4m Duotone wing at the shop.  I had to know if it was what I had been waiting for.  Downwinding on a foil with a kite or sail is pretty crap, you just don’t have full freedom. 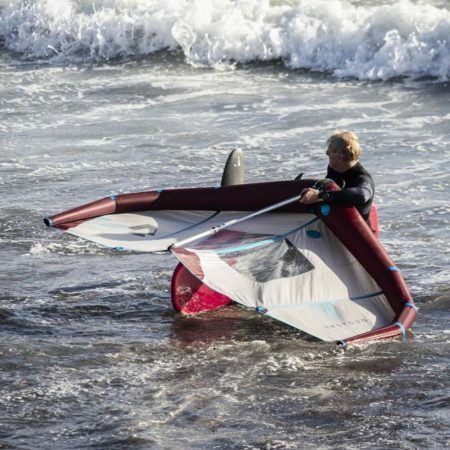 I had all the gear, and very little idea when I went out in 8-14 knots (Duotone 4m Wing is rated 15-25 knots) and had a good long walk back up the beach.  Learned a lot and still had no joy.  Still not about to give up, I figured it was more to do with lack of wind than anything else.  So I waited another week until a recent WNW windy Sunday with wind from 8-15 knots at first and then expected to build to 20+ knots.  I headed to the river but noticing the wind lightening, I detoured to the nearest beach which happened to be Cottesloe.

It was about 12 knots whilst I rigged and was VERY choppy, VERY onshore and VERY gusty.  I ported the gear onto the beach at waters edge and dragged the gear into the water to the bemusement of local kiters who were coming in with the winds dropping.  After a couple of failed water starts and acquaintances with the reef, I figured I’d be better swimming the rig out beyond the surf.  This was a mission because the surf was about shoulder high, very short period and messy! 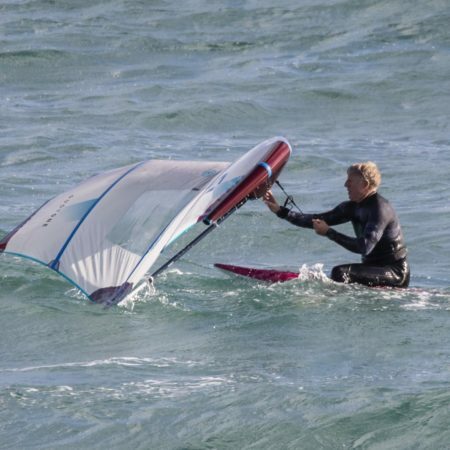 out the back, the 12 odd knots were enough to get me to my feet and wobble Southward whilst waving the wing awkwardly all over the show like a drunken sailor doing semaphore as I struggled to balance with the holey, shifting wind.  Several times I almost had the board free of the water only to find a hole in the wind and return to the surface.  After about 45 minutes, I was 3/4 of the way to Leighton Beach.  I was exhausted and extremely frustrated and wanted to get back to my car and call it a day.  I managed to get back to within a hundred metres south of the southern Cott Groyne but couldn’t clear the end of the groyne despite many attempts and tacking upwind to my best ability.  Soon I was washed up onto the beach where I struggled with the rig to get it clear of the water.  I was frustrated, demoralized, exhausted, cramping and ready to give up, but didn’t have anything left in the tank to carry the gear the 1/2 a mile back to my car.  On the upshot, I had created some colourful new language struggling with the gear on the water.  So there I sat, recuperating on the beach when I noticed a mate up on the hill.  We spoke for 10-15 minutes as I complained about the gear when all of a sudden, the wind came in with a frontal cloud.  Suddenly I had 15-18 knots of wind and thought to have one more go at it. 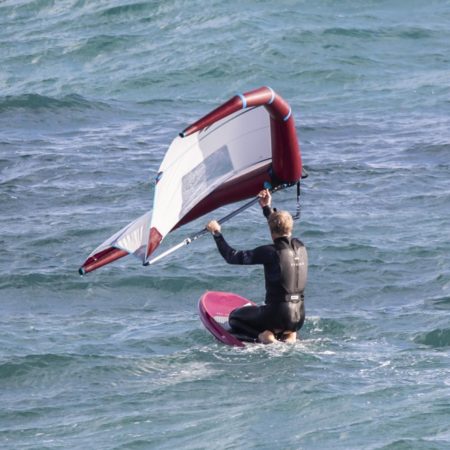 I waded back into the water, jumped on the board, set the wing and jumped to my feet.  Within seconds, I was up on the foil and riding quickly upwind.  I rode for maybe 1km on starboard tack, fell on the gybe, and popped back up on the wing again on the port tack.  I was motoring along and trying to absorb all I was learning so as to verbalise it later.  I easily cleared the groyne and foiled up to Iso’s, gybed up on the foil and did several more foiling runs back and forth along the beach behind the surf experimenting with the wing and foil, riding many little bumps and enjoying the ride (hard not to by comparison).

In the middle of the wind range, the sport is actually fairly easy so long as you know how to foil.  Upwind is a breeze and downwind is also very easy.  I forgot about my tiredness and stayed out a short while longer.  I’d finally cracked it and was given a tiny glimpse into the infinite potential this sport actually has.  I finished on a high and called it a day. 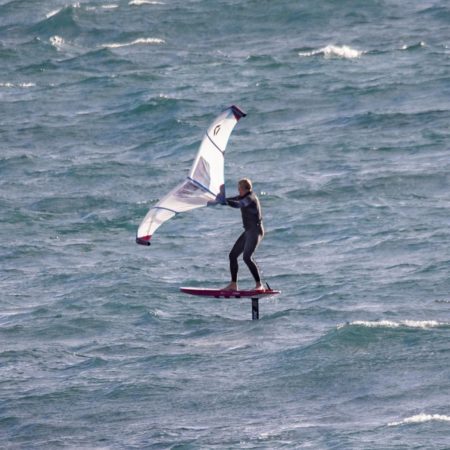 A week later, I had another shot at it on the river in flat conditions and again, slight and shifty rainy winds .  Again I struggled to get it on the foil and had to muscle the wing around desperately trying to get the board up on the wing.  Forty odd minutes later, a good 15+ knot gust came through and with one pump, I was winging my way silently across the surface, flying upwind and having a much better time experimenting with trim, balance, speed and wing positioning and profile settings.  I learned heaps in just 10 minutes before the wind dropped off again.

So, that was actually my 4th session, two of which I managed to fly the foil.  I have learned a huge amount of what to do and more importantly, what not to do wind winging. 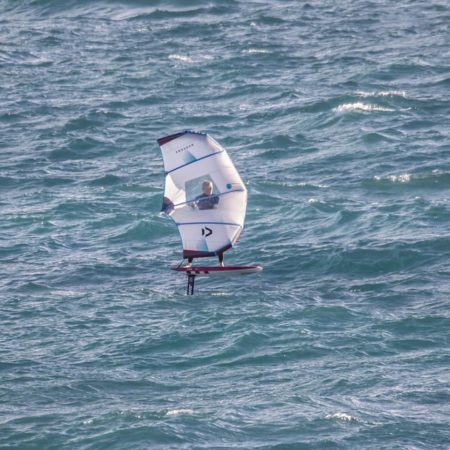 I can now state that I do love this sport and can’t wait for the summer breezes to begin so I can downwind the entire coast from Freo to Hillarys.  I will take every opportunity to get out in 15+ knots to get more skills and see what else there is and how I can use it to get me interesting and different uses of the ocean and it’s wind and waves.

Here is what Wind Winging is :

Really fun
Very Addictive
Fairly easy (if you have windsurfed and can foil.  If you haven’t done either of these, it will challenge you!)
Fast rigging
Fast pack down
SImple in concept
Super portable
Great workout
Versatile (Wave, DW, freeriding)
Really Safe.
Very free form
Durable and rugged
Doesn’t require perfect launch sites.  U can literally launch off rocks, jettys or even the back of a boat.
No harness required.

Here is what Wind Winging ISN’T:

So will I stop kite foil racing?  No, nor will I give up surfing, or paddling.  I will however, make room for this additional fun and the additional options it brings in terms of tow in foiling, paddle wave foiling, foil pumping etc.  It’s simply a different way to have fun in the ocean.  You don’t have to rush out and buy one, but it is definitely worth having a go on one in good conditions.  It reminds me of the joy when I started wind surfing, then again when I started kite surfing, surfing, paddling and downwinding.

I personally love it and and am a bit addicted and you will see me on the water riding around on my new Wind Wing, Wing Thing, Wing Foil, Hand kite whatever you want to call it, exploring new possibilities on the waves.

If you want to try the wing and foil, I am happy to demo it and give some instruction.