The Daytona project was announced about eighteen months ago at the Australian dealer meeting when we were informed about the name change to Duotone.  The Boards and More group had decided to start a project to build a fast foil which would be competitive on the world stage whilst being easy enough to use for the average weekend club racer. The design was tasked to Jerome Bonieux.

The prototype arrived in August and Jerome started testing.  Jerome’s max speeds were good, in the mid 30 knot range, but more importantly his average speeds over 500m and 1000m were excellent, consistently very high.

It wasn’t until a week or so later at the Mauritius Pro tour event when the Pro’s came to town that Jerome asked Axel Mazela to try the foil against the Mikes Lab and another leading brand.  Axel was said to hit 40 knots on the ML and 39 knots on the Daytona.  Jerome was very excited and justifiably so.

The Daytona is a full carbon race foil which is targeted at progressing racers and freefoilers with a fancy for max speed.

The 105cm mast is pedestal mounted and all carbon with a ML style (Four screw) connection to the fuse.

The glider component is also full carbon with front wing, fuselage and stabilizer all one piece. It’s very light and quite stiff.  The mast is pretty much parallel as in no taper to the bottom.  The mount plate is hollow to save weight.

The factory covers are made to measure, fit perfectly and have an enormous amount of thought in the design.  Best covers I have seen on any foil!

Taking it to the river and I bolted it onto the bottom of the Duotone Indy race board and set the mast at 1cm back from centre.  Without so much as a cursory sand, I carried it carefully out into the water and flying my trusty 15m Flysurfer VMG, I headed out. The first thing I noticed was how forgiving the low speed high angle of attack stall speed was on take off.  It just didn’t stall and gradually eased up onto level flight.  As soon as I reached around 20 knots, the foil started singing, in fact, there were three different pitch notes coming from the foil.  The faster I went, the worse it got to a point where I couldn’t stand it and returned to the shore to sand the trailing edges.

I grabbed a sheet of 600 grit wet and dry and sanded the trailing edges of the mast, stabilizer and front wing.  I did this with the foil in the shallows and without much care and I managed to inflict two pretty serious cuts one in my right hand finger and another in my left palm from the trailing edge of the mast.

Immediately on water start, there was a dramatic change, a serious reduction in sound.  It was reasonably quiet and fast on the first run, the balance was amazing, it flew very straight and level and only required minor changes to trim the board at increasing speeds.  I couldn’t believe how locked in the board felt as though the foil was running on rails straight, fast and level, amazing but it did feel like it wasn’t reaching it’s full potential in terms of speed.

I spent the next two hours just enjoying the foil as the wind increased.  I could load the hell out of my back foot as the 15m VMG was getting more and more powered in the strengthening breeze. Fully canted over and loading the wings had the wing tip constantly breaking the surface but with no ill effect.  Some foils will violently buck or even fully ventilate into a crash if this happens, and it took me a while to get used to trusting it.  No kick, not venting, just a little gurgle from the tip vortice.  There was not a hint of ventilation, even fully loaded in gusts over 15 knots, the foil held its ground and we sped upwind at up to 23 knots.  Downwind, I went deep at speeds of just over 30 knots.  The difference to other foils I have ridden was that this time at 30 knots, the foil was so locked in and stable, that I was confident to push and edge for more speed and greater depth.  My speed was very consistently in 29-30 knot range over 1km or more.  So impressed.  Previous to this foil I would often hit peak speeds of 30 knots, but couldn’t maintain it as it took too much effort or concentration which was really fatiguing.

Tacking was quite different from what I was used to in that it being so locked in that I felt I needed to drive it through the turns more so, but that the exits of the tacks were cleaner and easier.  It would take me a few more sessions to dial in the tacking technicalities.  Moving to a board with deck pads was also new and takes time to adjust.  Gybes were the easiest I have ever done, the foil is so incredibly stable I had time and the ability to make small errors through the gybe.  My speed was good and the foil just made it so easy.

Prior to the next session I spoke to Jerome who gave me some advice on sanding and mast position, this time 800 grit all over. It was suggested I move the mast to 2 or 2.5 back from neutral as the sanding will reduce the drag and make the foil want to climb more.  Moving the mast back counters this.  Straight away, there was a very noticeable reduction in drag and the foil felt faster through the water.  That particular day was a weird one, there was some very gusty wind and some strange almost invisible weed which would stick to the mast which threw off my testing.  Although hitting a new PB top speed of 31.4 knots the session was too “all over the place” to get a real feel for it so I cut it short.

Next test day was again on the river in very gusty conditions, again on the Flysurfer VMG but this time the 11m.  Since the previous test I had now wet n dry’d the entire mast and wings with 1200 grit paper.  The difference was amazing.  The foil felt really slick and free through the water and all noise was now gone.  The foil was flying super stable and very predictably at a very comfortable 30+ knots.  The wind was around 15 knots but started getting quite gusty with big holes in it and eventually started easing.  At one point, a gust quickly followed by a lull almost inverted my kite at speed which spooked me and time I came in and changed down to an 8m Soul (more robust in difficult conditions).  I knew this would be underpowered (couldn’t make tacks) but I wanted to test reaching speed on the foil.  My first run out from the beach I managed 32.5 knots on the tiny kite in failing winds.  The foil was perfect and so much fun to ride.  It felt fast, stable and ‘drag free’ in position 2, aft of centre.

I’ve since had several more sessions on the Daytona and Indy board and have now become quite accustomed to it. Despite having less than ideal conditions to ride it in over the last week or so, I took it to Pinnaroo in weedy light conditions and City Beach in 15 odd knots and big open ocean chop.  It’s just easy to go fast when you are stable.  The foil seems to be quite forgiving in breach conditions too.  In racing last weekend, rounding the top mark and rasing the 15m VMG high to pass a couple of Catarmarans, I was lifted up and the foil breached at speed.  I recovered without slowing and continued, mind blown!

When Jerome said the foil was stable, his words didn’t really give an inkling as to how stable it is or what this would mean to me as a progressing race foiler.  I’ve never really ridden a foil as stable as the Daytona.  The stability and lack of ventilation and “kicking” allows you the confidence to really go pushing the foil much harder than you can on other foils.  The “rides on rails” directional stability gives you the confidence to hunt down gusts, sheet the bar in, get on the edge and put the pedal down for max speed without the fear of exploding at high speed.  With stability comes the ability to not only hit high speeds, but to maintain them comfortably over a long run.  An incredibly good foil which will take all but the international pro riders to the next level … and then some!  Accessible speed and control makes this foil unlike anything else available.  I have no doubt in good conditions I will hit my target speed of 35 knots soon.

Since this review was written, I’ve spent a lot of time on the Daytona and have indeed hit my goal of 35 knots (well, 34.94 knots, but who’s counting ;-))  My understanding of the foil and working with it’s strengths has helped me to be much faster around the race course.  We have since sold 6 Daytona’s all with very repeatable results from the delighted owners.  Still loving the foil. 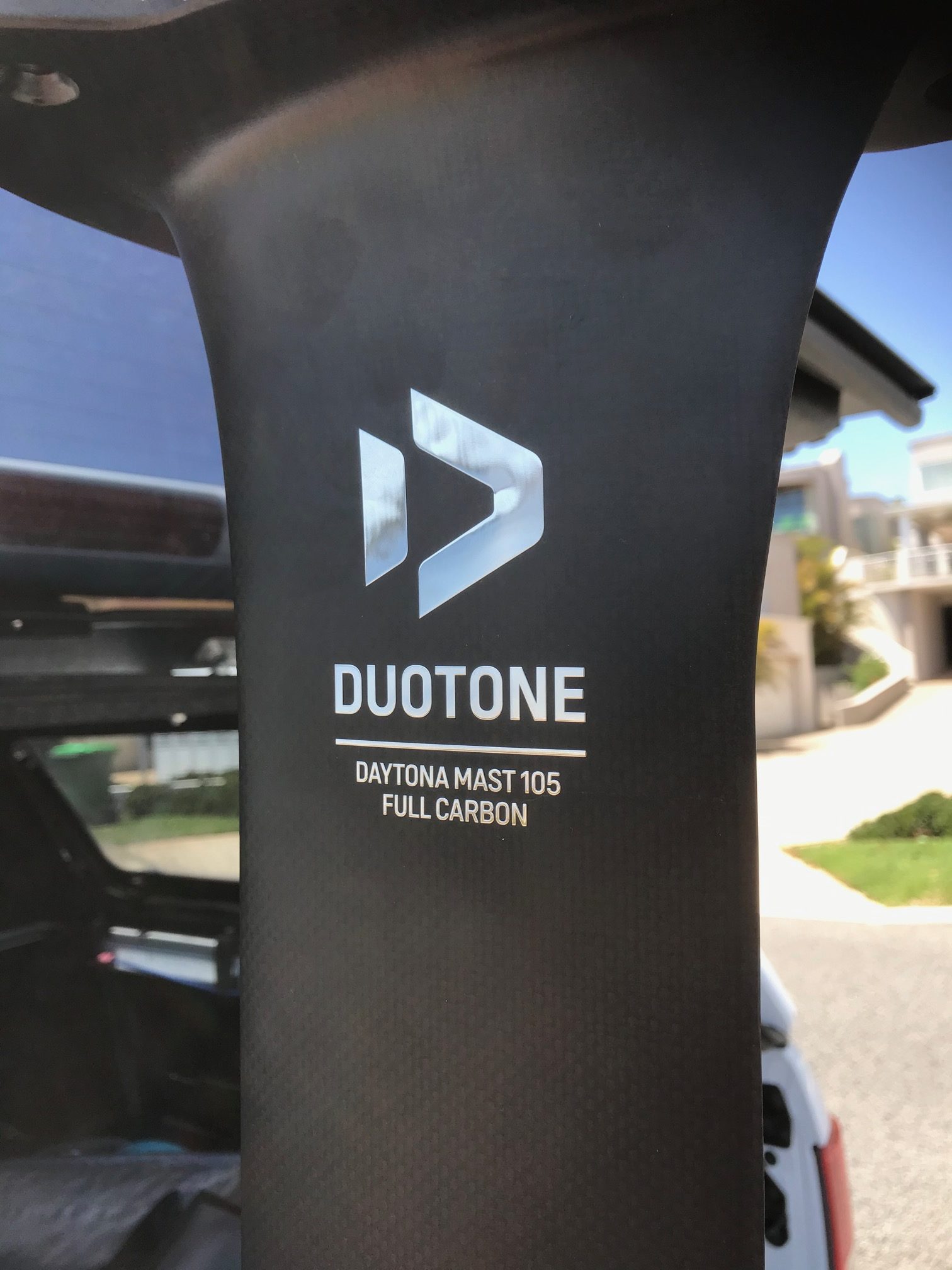 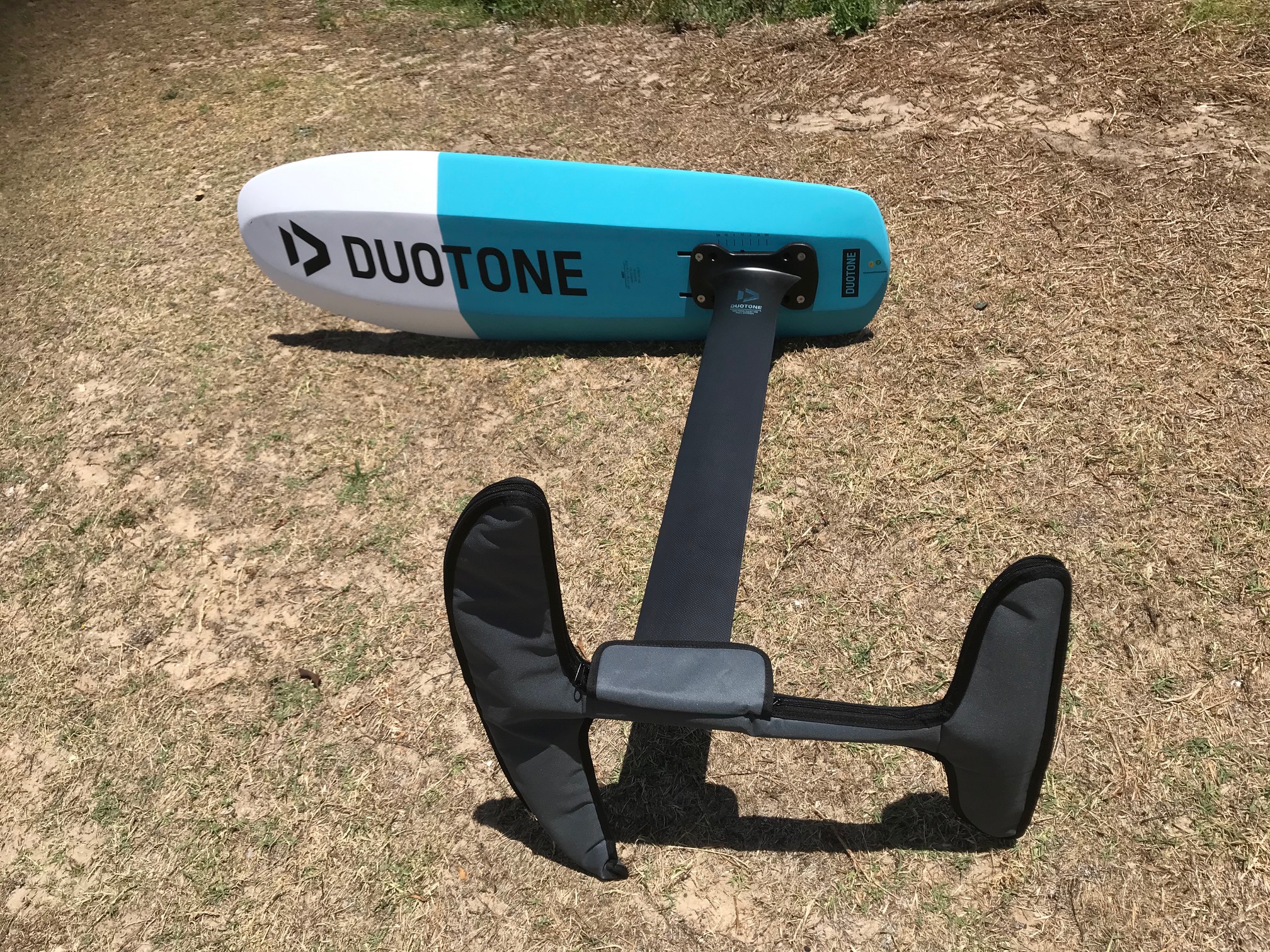 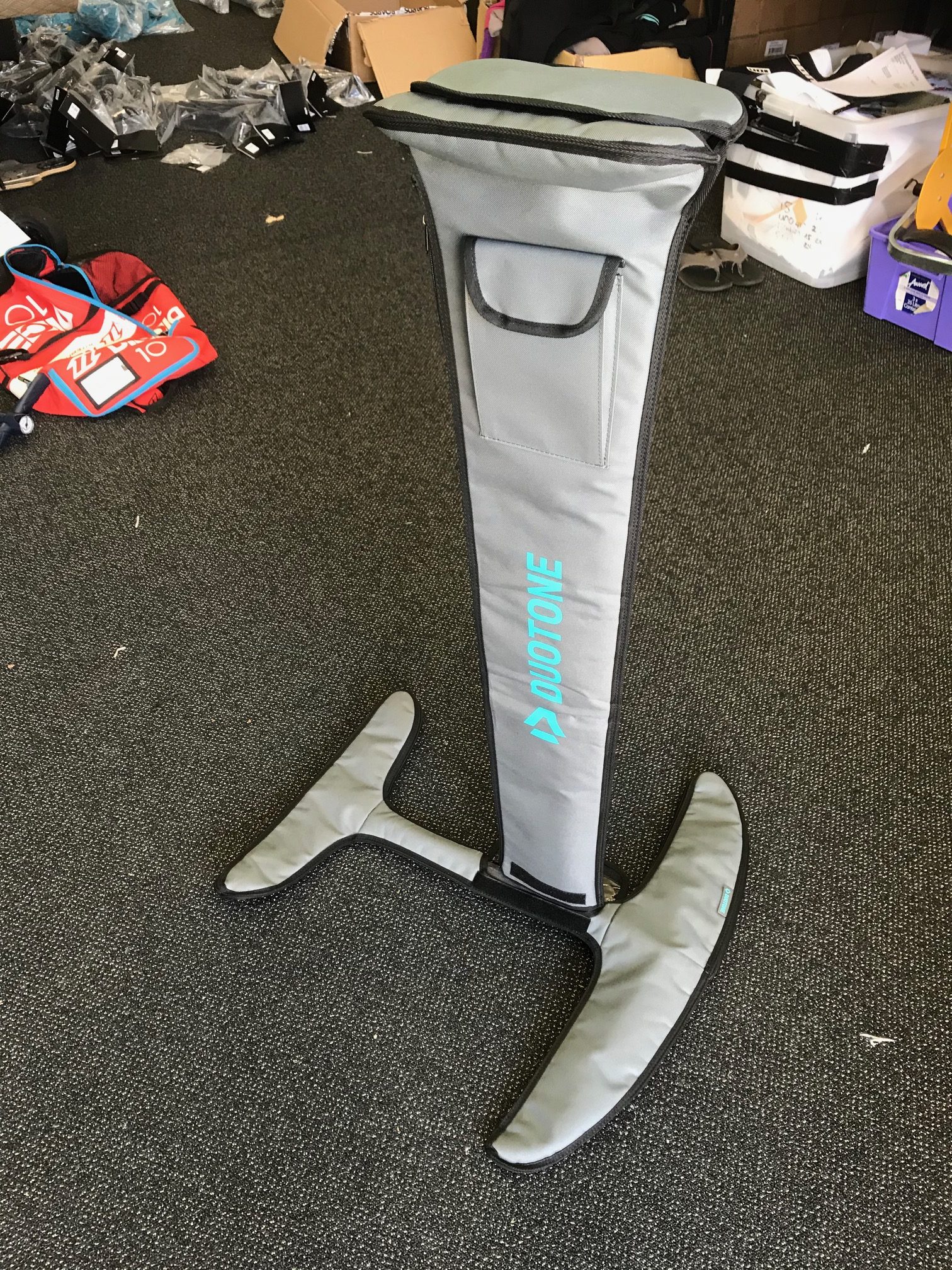 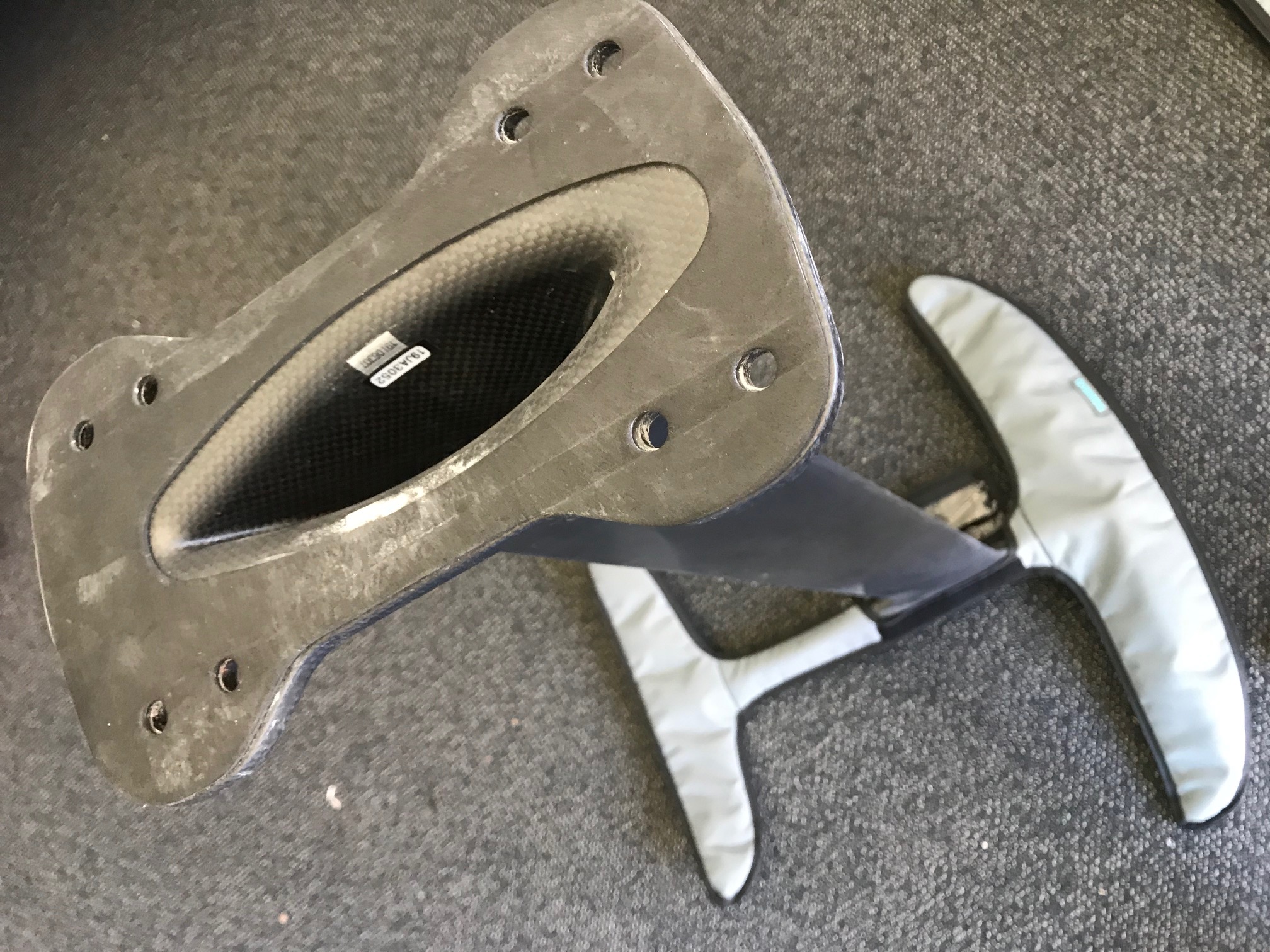 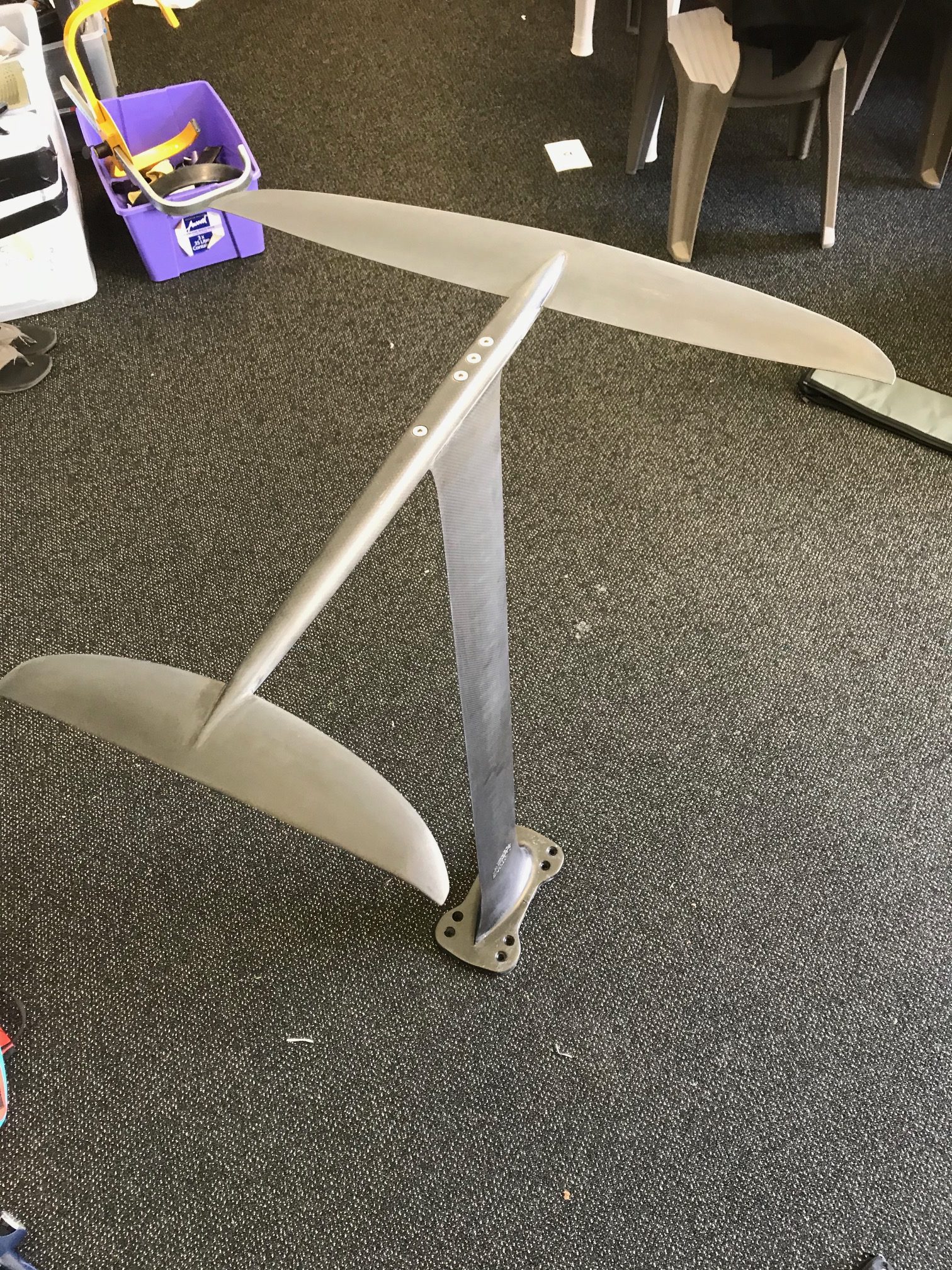