Flysurfer, along with most other race kite manufacturers released their final design kites in time for the IKA registration closing date this year.  The latest registered designs are in place for four years for the 2024 Paris Olympics.

The (original) Flysurfer VMG race kites were an amazing wing designed to reduce drag by removing a layer of bridles, as well as other improvements over the Sonic Race kites.  Unfortunately, the VMG race kite was never registered by IKA and so was unable to be raced in some professional IKA sanctioned events. 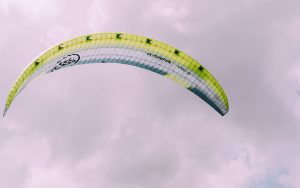 The Flysurfer VMG2 was the much anticipated release for Flysurfer fans, especially after seeing Theo De Ramecourt decimate the fleet on VMG2 prototypes in the Mexican, La Ventana race series in early 2020.  Benni Boelli stunned kite racers with the most progressive kite design ever.  A further reduction in bridling to only A lines and B lines.  This was made possible by the addition of thin fibreglass battens inside the kite which spread the load from the two bridle attach points evenly to the entire length of the kites chord.  This was added to with even thinner bridle lines further reducing drag.

The turning effect was changed from braking the trailing edge, (creating drag on the inside wingtip), to now twisting the entire wing resulting in more speed throughout changes of direction.  The further reduction of bridling has made for a very slick kite with excellent upwind and downwind angles and speed.  The new VMG2 has unbelievable wind ranges compared to most other race kites.  Low end of the kites abilities has maybe gone up by one knot, however, the upper wind range has had a dramatic increase.  Take for instance the wind range of the 13m VMG2.  8-27 knots!

The VMG2 has had an additional two intake vents to make inflation faster and to keep internal pressure higher for better stability in the wingtips.

So how does it go?  I was excited to get the new kites, despite having loved and gotten very familiar with my VMG quiver.  I guess the intense curiosity to see how these kites would fly and how they worked as there was almost no leakage of info prior to release.  When I looked at the wind range chart, I decided to try and get away with a three kite quiver that being 18m, 13m and 10m instead of my old VMG 21, 15, 13, 11 and 9.

The VMG2 is a striking looking kite and is beautiful to observe in the sky.  The ease of use compared to the previous VMG is evident from the moment you launch.  It inflates quickly and sits ever so slightly deeper in the wind window. Not quite as unnerving as the original VMG at 12 o’clock which seemingly sat upwind of you (bites nails nervously). 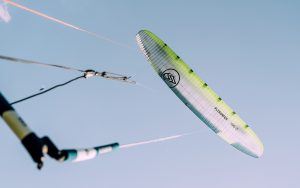 The first thing you notice is the bar pressure is slightly higher and the pressure increases in a nice curve as you sheet in to the point of stall.  This makes sheeting and ‘feeling’ the kite ‘breathe’ when riding, much easier and more intuitive.  This translates into not needing to keep your eye on the kite quite so much.  As with the previous model, the VMG likes to breathe and run with a little less back line tension.  Allowing to to surge forward and sit high in the apparent wind window rewards much more than trying to sheet in for more power.

For me, the wind range of the new VMG2 is one of the biggest features.  The ability to hold down a bigger kite with less effort means I get more useable power in each kite, especially in the upper half of the wind range.  The wide wind range means one kite can handle the range of winds thrown up without having to go back to the beach and change sizes.  When powered and hit by a large gust, the kite has the ability to depower to such an extent, you aren’t pulled off your line.  This can be the difference when on a tight layline to the top mark, between keeping the heading and being yanked down below it.

In the last weekend of racing, I chose the 13m VMG2, the wind was very strong (20-23 knots) in the first race, then the breeze dropped to 15-20 knots  for the second race and then dropped to 10-15 knots for the last race.  I was well powered in the first race, comfortably powered in the second and then had just enough in the third race.  Not having to race back to the beach and hurriedly self land, pack up and re-rig a second kite it a thing of beauty.  If I had been on the older VMG, I would have had to change kites between races, likely missing a race. 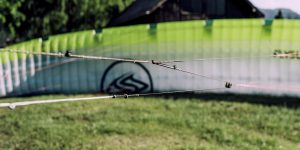 The previous VMG was a beast upwind and was fine downwind if you had excellent foiling skills.  For most, the downwind ability was always difficult when going up against the R1 V3.  The VMG was termed as “technical” to fly to access all of it’s potential.  The VMG2 has retained most of it’s upwind ability, especially when ridden well powered, but it’s the downwind ability which sets it apart from the previous model.  The downwind performance is much easier to access for us mere mortals.

In transitions the VMG moves fairly quickly when turned upwards and sheeted out giving nice lift across the top of the transition.  This offers seemingly endless weightlessness for the footwork and moving onto the new tack.  I have found the downwind speed and depth are only marginally more superior to the VMG but the ease of flying them make the speed and depth far more attainable, resulting in faster times around the course.  I’ve found coupling with my Levitaz R5 foil, my downwind VMG has markedly improved (62 degree gybes). 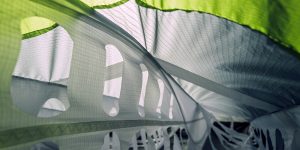 Being a heavier rider than most at 93 kg bare ass, I love the upper wind range of the VMG2’s.  When most riders on other race kites are getting yanked around on their 15’s and are looking to change down to a 13, I am still quite comfortable on my 18m.  Anyone who has raced knows the advantages of riding well powered to achieve unbeatable downwind and upwind angles.  You can either go faster, or same speed as others just with more depth or height.  I’ve been riding happily on my 13m VMG2 whilst others have been getting yanked on 10m kites.  The thinner profile and long depower means you can easily depower it enough to be comfortable upwind as well.

With the simple two layer bridle, there is no mixer, that’s right, NO MIXER!  There is nothing to mix, so you never need to do any bridle tuning.  This means less setup time, less pack away time, no downtime tuning and no canopy collapse issues … EVER!

OK, so enough of the glowing superlatives, where are the draw backs?   If you are a pro racer, it doesn’t really have any, but if you are an aspiring pro racer like my good self, then maybe.  Every kite has them, and the VMG2 has some too.  For one thing, the battens in the canopy cannot be folded, so the kite must stay in the long tubular style bag.  This is fine in smaller sizes but in the larger sizes, ie 18m and larger, they can be a little cumbersome for transport.  It’s a small problem I’m happy to deal with for the performance trade off. 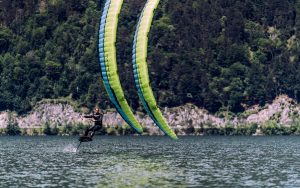 The other thing is water relaunch can be more difficult if the kite flips a wing tip through the bridle in a luff situation, as the bridle line can get caught on the back of the battens and sometimes won’t flick out on it’s own.  Although my kites getting wet are becoming rare, it can still happen in the odd circumstance and more oftenly in very light winds where I blow a gybe or a tack.  The additional intake vents on the outboard of the wing can very easily gulp water if you pull on the bridles if the tips are folded over exposing water to the vents.  The trick is to give the lines some slack and let the kite roll into position.

I think with some of the additional trailing edge ribs, the draining of water can be a bit slower than on the older VMG.  Both of these last two issues can be averted entirely by not allowing the kites to come in contact with the water.  They are for ‘professional use only’ as stated in the manual. 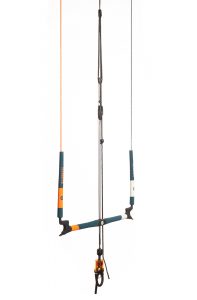 Some other great news is the new Flysurfer “Race” control bar is 52cm wide and comes with 12m lines and 3m extensions.  Every kite in the FLysurfer VMG2 range flies beautifully on the new bar on 12m lines.  The 10m isn’t twitchy, and the 18m isn’t slow, its quite frankly, amazing! No more need to carry multiple bar sizes and various line lengths.  Oh, and the new Race bar is beautiful.  Perfectly functional, ergonomic and meets all safety requirements including a safety flagging system that doesn’t interfere with the workings of the bar.  The new lines are thinner especially the steering lines which are super thin to reduce drag.

The Flysurfer VMG2 is an excellent re-designing  of the VMG and has proven very fast and easy to use.  I couldn’t imagine riding anything else.  They do it all so well and look stunning to boot.  Pretty sure I’ll easily manage the whole season on the three kite quiver although I have kept my old VMG 21 from last season as it doesn’t have the battens making it fly better in ultra light winds (~4 knots).  Although these days are rare, it’s still awesome in 5-12 knots.  The VMG2 rolls up easily with no special handling necessary, so no concertina packing means fast pack up and no concerns over the kites performance next time it see’s a race day.

The VMG2 comes with a spare set of battens and a kite bag, sand bag and manual.